Most FTL regulations contain a requirement for scheduling an extended recovery recurrent rest period once every few days, usually called a weekly rest. For example:

It is reflected in Leon’s FTL Settings by weekly_rest_min_length (in this case, 36 hours) and weekly_rest_max_separation (in this case, 168 hours). Other settings can be used to specify whether the weekly rest should include local nights, or whether it can be reduced, or performed outside the crew member’s home base.

However, this is rarely that simple. Some regulations allow for an alternative rest instead of the regular one, for example:

(…) rest periods will be extended at least:

which often leads to some confusion, especially in the case of alternating 36/60 “weekly” rest patterns.

So far this has been implemented in Leon in a way that FTL would require the basic (36-hour) rest to happen within the first 7 days following the previous weekly rest. If such rest is not scheduled in that period, FTL starts to require the alternative (longer) extended rest period. It can be illustrated with the following example:

This default behaviour can be summarised as follows: the more duty days are scheduled, the longer the following extended rest has to be.

Recently, we encountered a different phrasing of the weekly rest regulations, suggesting that the opposite interpretation may actually be more appropriate:

Before beginning an FDP or standby, an FCM must have had at least 1 of the following:

From the previous example, one can infer that the FDPs on 14-DEC and 15-DEC are actually not permitted, since there is neither a 36-hour rest in the previous 7 days (08-DEC–14-DEC) nor a 72-hours in the previous 10 days (05-DEC–14-DEC). The correct illustration would be as follows: 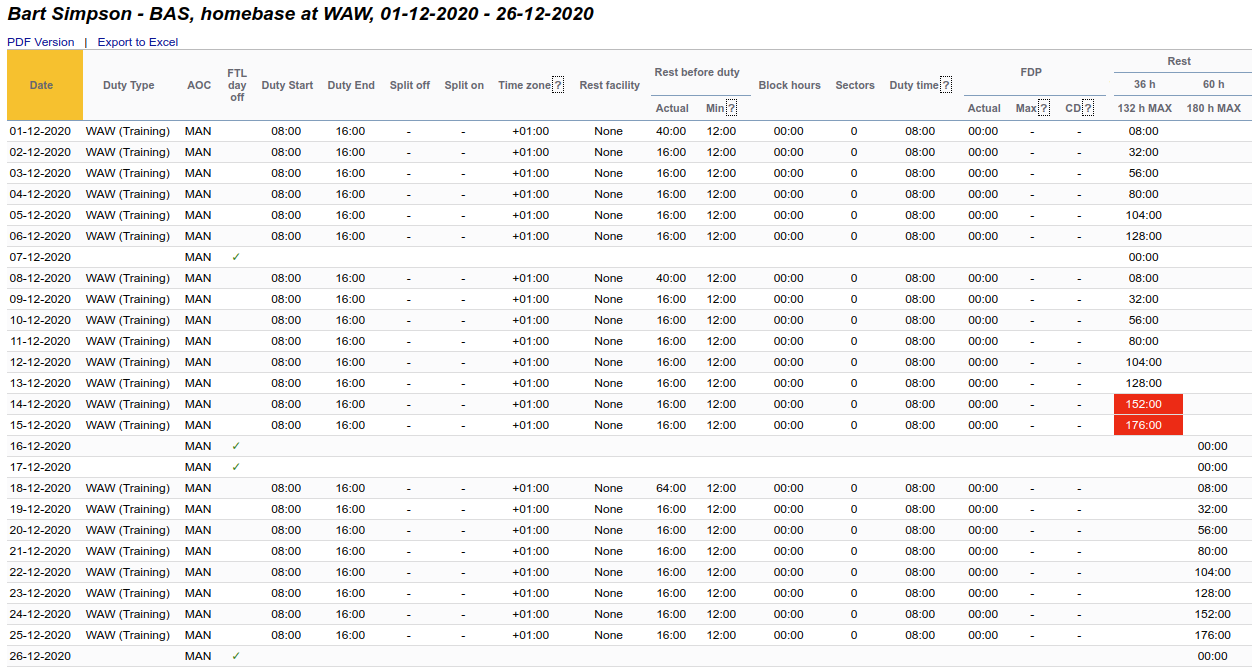 The new behaviour can be summarised as follows: the longer the weekly rest, the more duty days can be scheduled to follow it.

This new “forward” mode of calculating weekly rest can be enabled by setting weekly_rest_alternative_forward. This will only affect the regulations with an additional “alternative” definition of a weekly rest. Please contact customer support for more information.